San Diego State University has student versions of the Elephant and Donkey parties (Republicans and Democrats for the non-Americans reading this). These clubs are supposed to work under the SDSU Associated Students umbrella, and the College Democrats do. The College Republicans were removed for some infraction (possibly monetary) at some time before 2010, but they can still use college spaces. They've also dropped out of the California College Republicans meta-association over things revealed by the former leader of the SDSU-GOP Madison Marks-Noble about now ex-CCR head Ariana Rowlands called the Chico State Republicans President Sarah Morcott a "bitch." Rowlands wanted Marks-Noble to resign; the SDSU-GOP left the CCR instead. It should be understood that under Marks-Noble's leadership the club was infiltrated by the Identity Evropa white supremacist group, and that they were also part of UCSD's College Republican outfit as well. Identity Evropa changed their name to the "American Identity Movement" after they were exposed by Unicorn Riot; one of Identity Evropa's leaders is Patrick Casey, a SDSU graduate. Today the SDSU College Republicans are being run by Oliver Krvaric, the son of San Diego Republican Party chief Tony Krvaric*, and he's gone all-in with the Trump buzzwords of "Nationalist" and "America First", which explains these two screenshots from February: 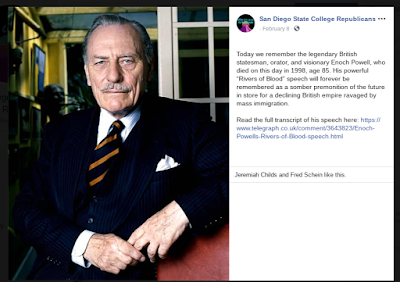 When you are claiming that hate speech doesn't exist and speaking well of Enoch Powell's "Rivers of Blood" speech (while claiming that "mass immigration" ravaged a declining British Empire), you might be a crypto-Nazi. Their Twitter account (https://twitter.com/SDSUCR) is laden with little bombs from  Right-wing YouTube ranters and others. The garish "vaporwave"- style of the header was changed over to this faux-English mansion library, but nothing has really changed.

The eagle logo looks a lot like the cover of Nevada Fighter by Michael Nesmith and the First National Band, but otherwise "meh."

As a final note, when May rolled around and students graduated "virtually" into a COVID-wrecked economy, SDSU-GOP published a letter to Trump asking to end H1B visas, and Oliver Krvaric was there on Tucker Carlson to explain his "points." He also appeared on KUSI-TV in San Diego County to also pontificate. Both of these videos come from Tony Krvaric's YouTube account.

Yes, we are probably going to get more of that Duncan D. Hunter-style action in the future, just watch.


* Tony may have control of the SD-GOP but he is not loved by certain people in the party - there was a major push by a lady in North County to get anybody to replace Krvaric in 2013; she had a Facebook page and was making calls, all because of how poorly things had gone in recent elections. Even the revelation that he was "Strider" of "Fairlight", leader of a Scandinavian warez-cracking group for Commodore 64 games in the 1980s, hasn't taken him down (yes, the father of an immigrant-bashing son is himself an immigrant, a Swede of Croatian descent.) The facts ought to be fascinating, when they come to light.
Posted by Strelnikov at 10:15 AM No comments: