The Death of "AlGore/satanicdruggie"; William Edward Atchison of ED goes over the Edge 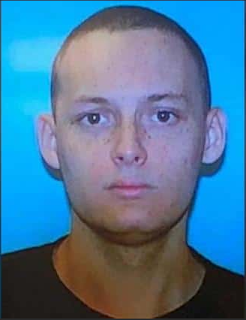 Above is the man himself - he was an Encyclopedia Dramatica editor/sysop for years, allegedly a decade. By his own admission, he was a high school dropout living in what he saw was a Shitsville (Aztec, New Mexico), a town Eric Barbour called "Very mean.....Aztec High is like the concentration camp, dominated by football and bullying.....[i]t is a shitty, sucky place." We know he was on a FBI watch list, but they found it hard to track him offline because he didn't have a driver's license. In short satanicdruggie was the loseringest Loser in the history of the Kingdom of Losers - because he lacked a high school diploma or GED, he couldn't get a job, he coulden't get a driver's license (probably because his parents couldn't afford the insurance), and his hatred of high school culture and general asocial behavior meant he could never leave this (self-created?) purgatory.

Posted by Strelnikov at 12:39 AM No comments:

Just in time for the Holidays, a look at how a nut from Turkey did a number on Wikipedia, proof that Jimbo and the higher "leadership" at the Wikimedia Foundation are out to lunch.


As if this had not been mentioned a hundred times before, the cult encyclopedia-thing called Wikipedia is “not censored”, according to the simple bleatings of its inner circle. One thing they can’t seem to figure out is even simpler. Whether Wikipedia is censored or not is completely immaterial. Because all a hostile government needs to do is to pass laws forcing ISPs to block certain websites within its borders. Thus, the people who should see unpleasant facts about their leaders — the people who actually live in that country — will be kept in the dark anyway. And Wikipedia’s NOTCENSORED blubbering is basically visible only to the wrong audience; mostly the idiot Americans and Western Europeans who give the Wikimedia Foundation the bulk of their donation income. The money keeps flowing in, everyone is snookered, no one “wins”.


Consider the odd Turkish figure known as Adnan Oktar, or “Harun Yahya” to his followers. He is a little-known-outside-Turkey Islamic writer and cult leader who is mostly famous for supporting creationism, condemning Israel, and saying a variety of outrageous things in the media. Plus he is known for trying to get all Internet criticism of himself censored by Turkish courts. [1][2][3][4] Thanks to blog entries like this, Oktar has successfully banned all Wordpress blogs in Turkey.


Quote: ”The screens of A9 before we spoke had shown the kittens listening with glassy-eyed attentiveness to Oktar’s daily three-hour broadcast, part of the channel’s 24-hour programming. After a monologue by Oktar, the kittens swayed disconnectedly to some music while seated, as two of his male followers danced around them. Among his causes, Oktar is an aggressive promoter of creationism, and has published hundreds of gold-embossed books through his organization, the Science Research Foundation (BAV), in his attempt to rubbish Darwinian theory, often under his pen name Harun Yahya."


There is no question that the Turkish regime has arrested and prosecuted Oktar in the past. Yet today he claims it "never happened". 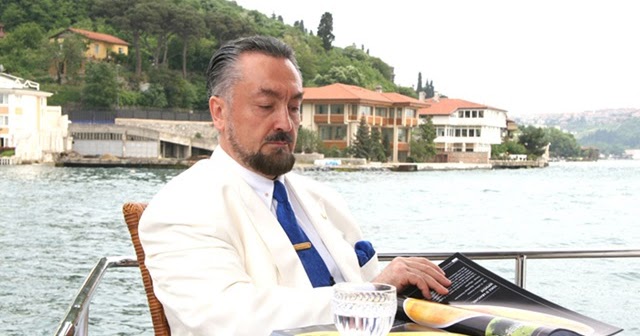 Adnan Oktar with his Creationism book, looking like he works for Ernst Stavro Blofeld.


As of 2017, Turkish media coverage of Oktar tends to be nothing less than adulatory and loving. And goes on and on about his "kittens", literally a "harem" of plastic-surgery modified bimbo followers. [5][6] It is utterly ludicrous to Westerners, yet Oktar is far from the only “holy man” in Turkey having a private “harem” with siliconed lips and asses. 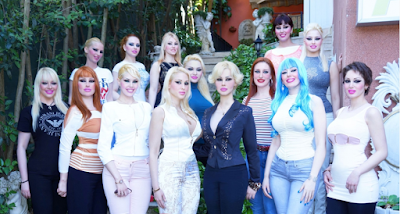 Adnan Oktar's women (source: Balkanist online magazine.)
So that brings us up to the crux: how Wikipedia handles (or mishandles) the story. As if Oktar's personal history were not bizarre enough by itself, Wikipedia is dominated by leftists, “free-speechers”, and pro-Israel cranks who hate him; and so his Wikipedia coverage tends to be as negative as possible.
Wikipedia administrator, "evil patroller", and scientific skeptic Bbb23 fought over the en-WP article extensively in 2011, along with Ashley “Fae” Van Haeften and other Wiki-skeptics [7][8][9] and still patrols it for "vandalism" as of 2017. Editor Geoffry Thomas tried to make it neutral in 2011 and was chased off Wikipedia for his trouble.


"Fun fact: Oktar's Wikipedia article has been a constant battleground since 2006. It is obvious he had paid editors trying to sanitize it, and fighting with WP resident skeptics. The top editor is one "Jeff5102", an obvious socialist and anti-creationist. Some incredible messes in the article history."


"Oktar tried to get the Turkish government to remove all Wikipedia content about him--and failed. You can tell he failed, because his Turkish Wikipedia article isn't much different. It makes an even bigger stink about his anti-Israel writings."


From the tr-WP article, autotranslated:


"Oktar was wanted to be sent to the military and was exempted from military service by the report "It is not suitable for military service" obtained from Eskişehir Air Hospital in 1993. [34] Oktar reports from seven different hospitals that he has paranoid schizophrenia. [34] Adnan Oktar Deputy Attorney Kerim Kalkan claimed that Adnan Oktar's allegations regarding mental health were untrue, citing the report of Gulhane Military Medical Academy. [35]"


"Adnan Oktar filed a lawsuit on 10 July 1991 on charges of using cocaine by the Istanbul Security Directorate. In accordance with the principle that "the evidence is suspected" and "the suspicions must be interpreted in favor of the defendant", the acquittal was decided on February 22, 1994, with the Supreme Court open to the case. “


Not that Oktar has anything to worry about from the Wikimedia Foundation. Luckily for him, Wikipedia was blocked in Turkey in 2017. And Wikipedia has a long, ranting article about it. The block was set up on orders from the strongman who was elected President in 2014, Recep Tayyip Erdoğan, a man who has ordered media outlets to close down, arrested his critics, and “allegedly staged” a military coup d’etat which allowed him to shoot hundreds of people he didn’t like. Remember that Turkey is a NATO member in good standing; yet they are behaving more like a banana republic, and have done so since the first military coup in 1980. Best of all, there are worse people in Turkey than Erdoğan, who is at least not an Islamic extremist. Jury’s still out on Adnan Oktar. Further helping Oktar’s need to “heel” the Web are some Turkish court decisions, which also prevent "defamation" of important personalities like, well, Adnan Oktar.


And if that’s not enough, have a few more amusing items.

Posted by Strelnikov at 7:29 PM No comments: