Stuff that has Nothing to Do With Wikipedia: "You just got logic'd" of Tumblr 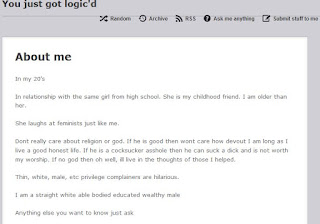 I can buy the "straight white male", just not the "wealthy" or "educated" part. 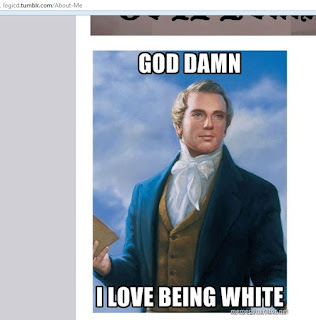 Notice that it's a picture of Joseph Smith. Above that is a meme picture with the legend "Proud Owner of a Penis."

Here he is on Dylann Roof, the Emanuel African Methodist Episcopal Church shooter:

So the Rhodesia and South Africa flag patches look funky and might be shopped. Suspiciously we have his manifesto out of nowhere. He was angry over blacks raping white women and taking the country over but decides to kill elderly people at a church after sitting with them for an hour. Talked about how “In seven days…I have seven days..” and during the shooting “I have to do it” Friend also said media is wrong about him being racist, never said anything racist or treated him differently. And his manifesto is hosted on some Russian website thats been up for months but this guy has no job?

Oh man how crazy would it be if the media took advantage of this to fan the race war flames they have been pushing and spun this into a race thing and outright lied about his character to do it, then altered some pics and put a fake manifesto lmao. Not like they have never been caught lying and photo shopping in the past, look at the Zimmerman audio and and Trayvon pics. Hell the woman from the church may have lied too about the quote “raping our women..” to take take advantage of the shooting. We see people lie all the time, just look at the Michael
Brown witnesses or that one women from the Trayvon trial lmao.

Not that im endorsing the tin foil here, but its interesting so far how the media who has a history of lying, manufacture, bias, and deceit, is covering the story. 2 friends gave interviews. 1 is white and said Dylan is racist etc, the other is black and lived with Dylan and said he is not racist, and yet the media focuses primarily on the comments of the white guy “southern pride” “racist jokes” etc"

(All typos left in place.) 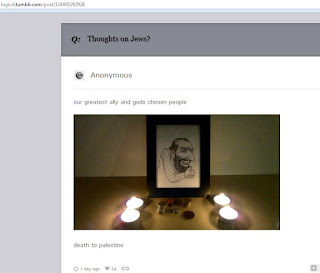 Note that is a framed picture of the "scheming Jew" meme originally drawn by "A. Wyatt Mann". 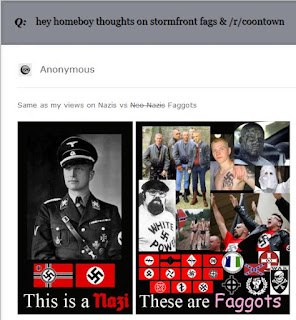 I guess skinheads, Klansmen, and neo-Nazis aren't clean, shaven, and pressed enough like the Obergruppenführer on the left to meet with Logic'd's high standards of National Socialism.

***
Logic'd wasn't the first far-Right Tumblr I ever ran across, that "honor" goes to the French or Italian Amour, Absinth, Revolution which I stumbled across looking for websites on Lars von Trier's 1992 film Zentropa (aka Europa.) There is now a list of fascist/white supremacist/neo-Nazi Tumblrs and it has to be over 100 blogs. To steal a Harper's article title, "the kids aren't all right."

So where do we begin?

This is another tale of paid editing and self-promotion.....Vaoverland (aka Mark Fisher) was on Wikipedia from 2004 to his death in April, 2011. He made administrator in 2005, and pretty much nobody noticed how from late November of 2004 to December of 2010 he created, then edited Virginia Overland Transportation, an article on the bus company his family owned and he worked at. During his time at Wikipedia, he also turned bits of it into his own Flickr, featuring photos of himself, family members, and vacation photos. He worked a lot with fellow Richmond, Virgina resident MPS on articles like the Greater Richmond Transit Company, though he worked on the Carl G. Fisher article by himself. 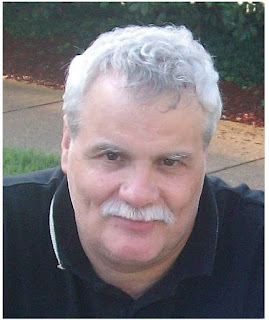 The big problem with Vaoverland is that he has been accused of plagiarism....obscure plagiarism. Hersch of Wikipediocracy had this to say:


"A friend of mine is an historian for the LaRouche organization. He was recently writing an article and trolling the net for research, and one thing led to another, which led to Wikipedia's article on Edward Hibberd Johnson. He there discovered a passage that he had written, which was inserted verbatim into Wikipedia by Mr. Vaoverland. The original article appeared in the LaRouche newspaper in 1986, and is available on the web....Vaoverland's subsequent edit adds more from the article, with some slight alterations, but not enough to make it not plagiarism. Of course, this was in 2005, while the rule structure at WP was still pretty loose. And of course, the material was added without a source, which is how it escaped Will Beback's great purge of LaRouche-sourced material, which cleansed Wikipedia of many similar infections. This one, however, remains to this day."


Here is E. H. Johnson article written by Mark Fisher, and here is the article, titled "Who Made the United States a Great Power?" by Anton Chaitkin. The section Fisher copied from is titled "Building a New World."  That's what makes Vaoverland still dangerous to Wikipedia, because who knows what sort of plagiarism he carried out using obscure sources that are extremely hard to track down.

As far as I can tell,  Vegaswikian was not a friend of Mark Fisher's, though he did do editing on the Virginia Overland Transportation article on July 9, 2009. As with Wikipediocracy's Tarantino, we have no idea who he/she/they are. EricBarbour (on October 4, 2014 at the WO-MB) rattled off a list of articles VW had worked on:
728 Las Vegas
454 McCarran International Airport
366 Las Vegas Valley
363 US Airways
300 Las Vegas Strip
244 List of casinos
204 Wynn Las Vegas
199 Clark County School District

Alleged IPs Vegaswikian used were: 69.68.204.34 ; 65.41.215.30 ; 65.41.248.221 ; 65.41.213.66. Was very into McCarran International Airport, changed from IP to Vegaswikian in March 2005, has since then mostly edited on Las Vegas commercial subjects, never putting in anything negative, scandalous, or disturbing about the town or the businesses in it or around it.Vegaswikian is probably the reason why the article on the Rawson-Neal Psychiatric Hospital is a large, picture-less stub. Rawson-Neal is the only mental hospital in the state of Nevada, and used by the casinos as a place to send gamblers who have breakdowns.

Almost as blatant as the Wifione scam, Vegaswikian has to be working for a casino, the Las Vegas Chamber of Commerce, the city government, or McCarran International Airport.....this is local boosterism of the worst sort. At this point I have no idea why anybody would trust Wikipedia, what with the paid editing, the vendettas, the goobers who use it as their personal photo album, and the general reality distortion thanks to the hidden bias.

I didn't want this blog to become the "let's bag on Wikipediocracy's messageboard denizens" website mostly because the people who read that stuff are mostly from Wikipediocracy. However, material has come up about long-time boardie Vigilant which needs to be discussed.

Vigilant was known to Wikipedia users as Vigilant~enwiki for two months in 2006, and he spent most of his time fighting with Jeff Merkey (Waya sahoni and Sint Holo.) Merkey would become an obsession over the next ten years. Merkey worked for Novell, considered himself of partial Native American descent (thus the names for his sockpuppets), was banned from Wikipedia, and was chased off Wikipedia Review by Vigilant when that messageboard was still viable. (Jeff Merkey also likes to sue anybody who criticizes him online.) Merkey thought his antagonist was actually Paul Hands, but he also mentioned "Al Petrofsky" by name. That, by the way, is the same version of Petrofsky's first name used on the SCOfacts website, which also has a page on Merkey. There is also a page on the legal dealings of Eclipse Aviation, which was this light aviation company run by an ex-Microsoft employee. The firm lasted from 1998 to 2009, but that Petrofsky website dates to 2008. All of the websites run by Petrofsky were about legal cases, with SCOfacts dealing in the lawsuits run by a UNIX software manufacturer who decided to sue as many Linux vendors and users as humanly possible and they were bankrupt by 2009-ish. Why Alan P. Petrofsky would give a shit about SCO is beyond me (I've been told he shorted loads of SCO stock and was unhappy when the bottom fell out.) He also runs an .org website of his last name with such exciting things as a PDF of a legal complaint about the Borat movie.

The thing that sticks out with that Eclipse Aviation legal blog is that there may be a link to Wikipedia through the user name Ahunt, who writes tons of entries on civil aviation topics. Is Vigilant also Ahunt? Are both of them Petrofsky? Or neither? There is a belief I've been told that Vigilant is actually using Wikipedia as a search engine optimization linkfarm like Jehochman allegedly did. On Wikipediocracy's messageboard there are only two long-time members where the true names are not known: Tarantino and Vigilant. We will probably never know who they are.

A Czech guy on the Merkey-Petrofsky fights.

[Postscript: We forgot to mention the "SCOX" Yahoo group where Petrofsky was a member (or "Demon" as they were known) in 2003-2004. The Yahoo archive of that group has since vanished.]
Posted by Strelnikov at 9:53 PM 2 comments:

Since my last post on the paranoid world of Wikipediocracy, things have begun to melt down. Dan Murphy, who is an actual journalist with the Christian Science Monitor, was driven out by Greybeard for revealing his true identity as the former Intel executive Steven McGeady, who had a hard relationship with Wikipedia (look at his BLP.) Or was he driven out by McGeady's constant nonsense, take your pick. Triptych was thrown out for the fifth time for some piddling bullshit. And HRIP7 (Andreas Kolbe) lost his moderator status over things posted on Twitter by Lightbreather (possibly for this) though why people are being punished for other people's personal Tweets is beyond me.

Wikipediocracy was supposed to be better than Wikipedia Review, but once again control has passed to a cabal of Zoloft ("Monty" Burns), Midsize Jake aka Somey (true name unknown), with Steven McGeady footing the bills, which might explain all the purges and chess-piece moving. There is no open discussion of money on the messageboard.....maybe there should be.

Wikipediocracy's messageboard suffers from HRIP7's willingness to be friendly with members of the Wikipedia subculture, even though it's chock-full of lunatics, which may explain why The Devil's Advocate has been allowed to stay, despite his constant trolling. The subject of Wikipedia watching suffers from the fact that Tarantino has reams of information, but he sits on it for some bizarre reason. Allegedly Greg Kohs has a book written on paid editing but either has no publisher yet or is holding back. Did I also mention that there is a giant backlog of people who go through the process of joining and never make one post? I've seen that on other message boards, but on WO's messageboard Zoloft deletes "no comment accounts" for non-usage after two years or so. Finally, there is an account Encyclopaedia Dramatica members use to dish "Wiki sekrets" which was set up by an ED editor I'm not naming, and this account was accused of leaking material (to whom I don't know.) I emailed EricBarbour, his only comment was: