Because it would mean very little if we posted it here, our account of what happened on October 8th has been posted on Storify. The link is here: How to Get Thrown Out of a Wikipedia Conference in Three Easy Steps.

We will have more posts forthcoming.


All the video footage shot at WikiConJob Nord Amerika. If you have a YT account on are a Vimeo-nik or on Ru.Tube or that Brazilian Green Frog YouTube knockoff or the mainland Chinese YouTube knockoff, please mirror this video. The WMF or any of the goofballs shown will try to yank this down when they find out it exists.
Posted by Strelnikov at 12:26 PM No comments:

Yet more Reddit: The_Donald Subreddit in the Aftermath of the Election

I didn't want to talk about /r/The_Donald again, but reality made that an inevitability - their candidate won, and from the looks of it, that subreddit is not disbanding, though it might start falling apart when Donald John Trump's crazier campaign promises prove to be utterly impossible.

What I have found endlessly interesting with that subforum was the huge number of moderators, right now they have forty-nine people, the same amount they had in the summer, but many of the names have changed. Here it is today: 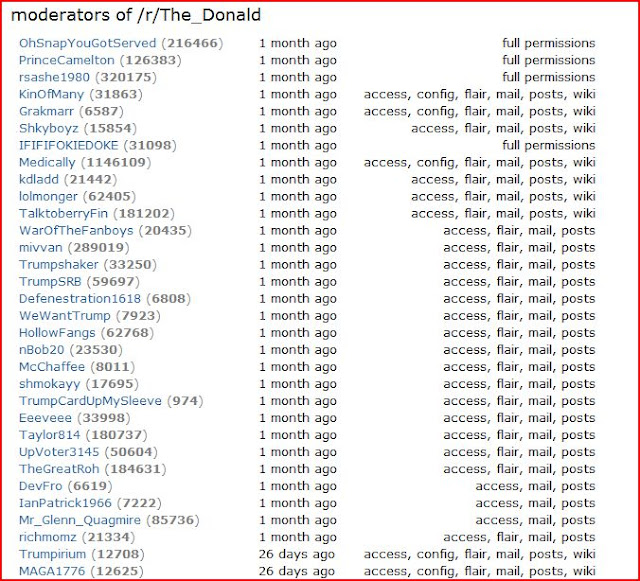 And here it was in early October: 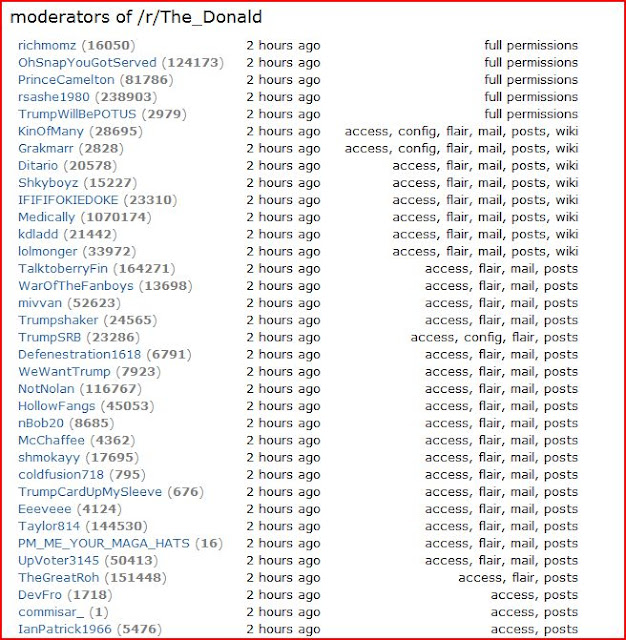 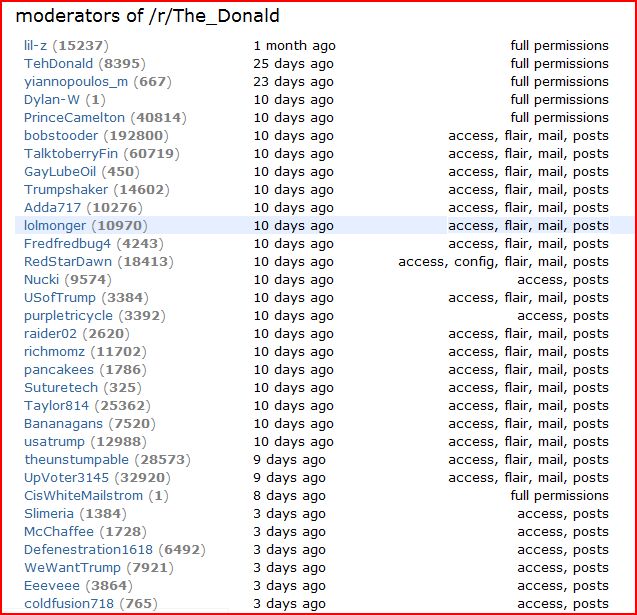 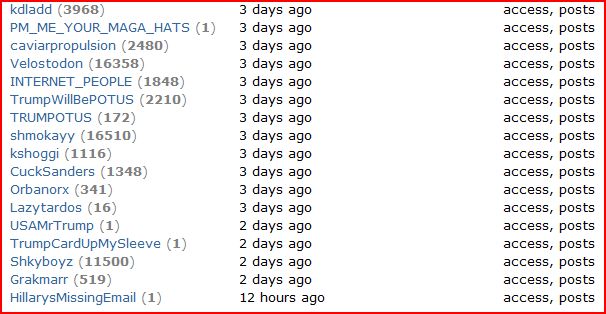 As I said last time, it is damn easy to buy Reddit accounts, to use Tor to have multiple accounts, and other tricks we don't know. I think they are changing mods constantly after the October jcm267/tehDonald bloodbath to somehow keep the Reddit admins from knowing who is really in charge, because the "head moderator" keeps shifting; richmoms was allegedly in charge at one point, then that changed. Then "she" was dropped and then picked up again. To be truthful, it doesn't matter; if corporate Reddit were to remove the head moderator, the mass would sprout a new one. And of course, that person would be yet another renamed "curated" sockpuppet.

Jcm267 had been a Digg user before Reddit came along, then changed sites. The subreddit /r/NoLibsWatch thinks that he was also nolibs, who had somewhere north of forty sockpuppet accounts. Until a raft of background drama of some sort forced him off Reddit, jcm267 became TehDonald, the chief of /r/The_Donald. Vice's Motherboard website has an article, How r/the_donald Became a melting Pot of Frustration and Hate, where they actually interview jcm267. Pastebin has the email interview, which looks like this:

What were you envisioning when you started the subreddit?

I was handed the subreddit when the creator of it decided to delete his account. This was within days maybe weeks of the announcement. This individual liked me for my anti-Bernie Sanders posts. We didn't have the best name for a Trump subreddit so I actually figured it would just be a nice place for a small group of supporters to have fun triggering anti-Trump people and, frankly, laughing with Trump at the same time.

>When did the_donald take off, in your mind? When did you know it was resonating with people?

It really took off when the primary season  was about to get under way. You can see by looking at our subreddit's statistics both at /r/the_donald/about/traffic and at redditmetrics.com The subreddits with the best names (/r/Trump, /r/DonaldTrump, etc) were either run by non-supporters or just plainly not managed very well.

People saw that we handled brigades from trolls really well. The current top mod, /u/lil-z, was brought in to help when we were being brigaded by /r/politics.
Left wing trolls have been getting banned really quickly for the longest time, going back to 2015. There was a /r/politics thread from a time we were being brigaded early on where a lot of people shared screenshots of their ban messages from me. The community really apprecited that I was banning these people with messages like "morons aren't allowed to post here".

We were basically the best game in town, despite not having one of the best names for a Trump subreddit.

/pol/ found us and has given us a tremendous amount of energy and some fantastic content. The people from /pol/ who can behave, which is probably most of them, stay. The people who don't behave usually wind up getting banned for rule 3.

Yeah, the algorithm change had an effect on our traffic and number of new subscribers. I really don't blame reddit for doing that, though. We were taking up 2/3 of the top 25 of /r/all and it looked like this was a "new normal" and not just a quick bounce from the Orlando event.

>Would you say that the subreddit is *just* about Trump and his candidacy or has it become a mishmash of all of these different groups and their cultures, etc.?

It is a mishmash that was only made possible by the candidacy of Donald Trump for President of the United States. There is a kind of energy behind Trump as a candidate that has not been seen from the right since probably Reagan. Trump's not Reagan, of course. He drags the party towards the middle while Reagan pulled it to the right, and immigration and trade (the issues that Trump is winning on) are issues where Reagan/Bush ultimately proved to be harmful. Reagan was a great president but like any person he was not perfect.

>As I mentioned, the subreddit was much less ... militant in the early days. Why was that, and do you ever long for those days?

I don't think we're all that militant. We have rules but those are needed to keep left wing SJWs, concern trolls, and 1488ers out of the subreddit. In the early days it was just a sub for a small number of people. Now it's a large community. I was involved in /r/Romney which was a failure back in 2012 because it tried to be too serious. I also created /r/Conspiratard. That subreddit became popular because it was "fun" and not a serious place. Most of us didn't like a lot of the people that /r/conspiratard attracted and put in a lot of rules that effectively killed the subreddit, inevitably pushing the insufferable SJW posters to the point where they formed their own community. When Cis pushed for stuff like using the sticky to push shitposts to the front page I was able to buy into it because I've seen first hand that easily digestible content and a fun culture do well on reddit. "Serious" does not. The way that /r/the_donald is run simply works.

>Though you've always banned outright racism, r/the_donald skirts the line in pretty much every post.

"Skirts the line in pretty much every post"? That's ridiculous.

>Are you comfortable with what the subreddit has become?

It sounds like a loaded question especially considering your "skirts the line" comment. It seems like you want to portray the_donald in a certain way and then get my reaction to it in order to make me look bad. /r/the_donald is a "safe space" for those who support Trump. This is a community that promotes the candidacy of a great candidate. No candidate is perfect but Trump is the best choice we have for 2016. We need immigration reform that does not grant amnesty to illegals and puts and end to end illegal immigration once and for all. We need to end the abuse of H1B and H2B visas by employers. We need to look into renegotiating or pulling out of every free trade deal, especially those that were signed with developing nations. The establishment from BOTH parties have fucked over the American people on immigration and trade, these issues unite people from all over the political spectrum. These issues are why Trump won the GOP nomination and why he will win in the general against Crooked Hillary Clinton, who is probably the worst possible candidate for the Democrats to put up against Trump. She represents everything that is wrong with politics in America today.

>Do you consider the_donald to be a place for free speech? Why or why not?

No, it never has been a "free speech" subreddit. We have rules that are necessary for preserving our culture. "Free speech" applies to governments, not subreddits. This isn't /pol/, this is a place that is intended to reach a wider and more mainstream audience.

>In your mind, who is a poster at r/the_donald i.e. is there an archetype?

It's hard to say that there is an archetype. Again, big tent. It's pretty safe to say that nearly all of us agree on trade and immigration. We are pretty much all against multiculturalism. The rest is as you put earlier a "mishmash" of people from all over the political spectrum. We even have a lot of active posters who are from foreign countries! What unites us is a love for America.

Having actually dealt with jcm267 online, that interview makes my skin crawl.

If they hang around on that subreddit as November slips into December slips into late January, the "centipedes" will discover what it is like to be in a campaign victory party that cannot stop, like
Buñuel's The Exterminating Angel, but online. After a certain point the trolling and idiot racism will no longer seem "daring" and "an exercise of our first amendment rights" or whatever low-rent excuses they are willing to make to cover for their shitty behavior. So they will go off to "/r/MAGA-PREZ" or whatever they will call the sequel to The_Donald and it will all fade away because Trump the Reality will never match  Trump the Possibility. I encourage all my readers to screen shot as much of that cruddy subreddit as they can before time and "good taste" wipes it off the internet. Nobody involved should get out of it unscathed.
Posted by Strelnikov at 7:50 PM No comments: