A few years ago this blog looked at those Wikipedia "tag" boxes where admins decided that articles were not up to snuff for a Wikipedia article....which is a laugh if you have read random Wikipedia pages. As the opening examples for this installment, here is the tag over the stub for August von Kageneck, a German aristocrat and Wehrmacht panzer commander in WWII who later had a long career in journalism.

And his brother, the Luftwaffe fighter pilot and Count who was shot down in North Africa and died in a military hospital in Naples during January of 1942. He had 67 kills, many on the Eastern Front.

Above is his Bf.109E-7 fighter, a Messerschmitt subvariant that was getting long on the tooth by 1941 but common in the Mediterranean; note the white "North Africa" band near the tail. Many "Battle of Britain" E models would up in the puppet air forces of the dismembered states of Czechoslovakia and Yugoslavia, along with fascist Bulgaria and Hungary. Most of the surviving E models after 1941 ended up as fighter trainers in Germany or converted to fighter-bombers attacking shipping in the English Channel or bombing battlefront targets inside the USSR. (Drawing from website "Wings Palette".)

As a "related" article to the August von Kageneck bio, the Sturmgeschütz III piece also has a tag dating back to the end of 2013. For those not in the know, a StüG was an assault gun/tank killer built on a turretless Panzer III hull - a casement with square hatches in the roof and tank periscopes protected the crew, while the cannon was mounted on a mantlet. They were a stopgap solution for catching up to Soviet tank numbers, which they never truly did.

Not even ham radio is safe....

Even nerdy topics like amateur radio bands suffer from these tags, as can be seem in the article on the 40 meter shortwave band: 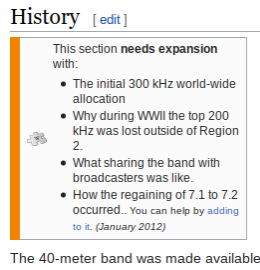 And you can see here, that box has been sitting there for eight years because whoever asked those questions gave up and dropped out of Wikipedia, lots of 'bots in the revision history. Also many of the people writing about 7 Megahertz don't seem to have actually listened to the band - thanks to mainland Chinese "border blaster" shortwave transmitters, the top end of the band is useless late at night unless you are using Morse code or single-sideband if you live on the West Coast. The Chinese transmissions can be heard clearly in Utah if the ions are right.

These are the people who troll Internet popup scams with telephone numbers to call, robocallers that connect to boiler rooms, and other telephone scams (power shutoff, the grandparent or 'relative in trouble' scam, numerous other grifts). Most of the scammers are working in Mumbai (Bombay) boiler rooms, or are one-man scams in Lagos, Nigeria* - the utility shutoff, IRS back taxes, and 'relative in trouble' scammers are American boiler rooms, though I've heard of grandparent scam calls coming from Mexico to hoodwink elderly Hispanic people. They want Moneygram payments, gift card numbers, money orders, and other low-rent methods of sending cash that doesn't involve checks or traceable money. Notice that I've linked to videos from Hoax Hotel, a YouTuber who has been doing edited videos of calls to scammers for five years. Wikipedia will not mention him at all - they like Kitboga, a streamer who does all of his scambaiting live. This means the videos (even the slightly edited ones) can go on for an hour or two, because Kitboga uses a voice changer and a mixing board to control the call in bizarre ways, and if it's a computer scam, he has a fake shell operating system as a "sandbox" while streaming/recording everything on another machine. Hoax Hotel cuts these down to 10 or 20 minute videos, which means that unlike Kitboga he is being penalized by the YouTube algorithem's love for long videos (longer videos, more chances to stick ads in them.) There are far more scambaiters than both of these guys, and before scambaiting there were the telemarketer harassers like Jim Florentine, Tom Mabe, many others. I could mention prank callers like Brad "RBCP" Carter of the Phone Losers of America, Captain Janks (the poser who calls into national news stations so he can say "Howard Stern's penis" after a few minutes of fake responses), the unfortunately recently-deceased Carlito (a friend of RBCP's), Longmont Potion Castle, John Legend, numerous others, but I consider prank calls to be another form of "telephone art."


Above: the short-lived "Nicole Mayhem" channel, who used scripts and auto-dialing to jam up IRS scammers (fake IRS agents demanding back taxes by telephone) in India. "She" only operated in 2017.

If you know the history of Russia and Ukraine from 1850 onward, then Wikipedia's articles can be darkly hilarious. The bio of Symon Petliura, head of the short-lived sovereign Ukrainian People's Republic (1918-21), hems and haws about his responsibility over the various pogroms carried out in his territory during the Russian Civil War, and won't name the 1919 pogrom in Proskuriv that UPR troops  carried out. Certainly Petliura spoke against pogroms in 1919, and they weren't UPR official policy, but I will be damned if they didn't keep happening, within the UPR forces, the Ukrainian warlords, the Polish Army, and even within the Red Army. Up to 50,000 Jewish people were killed and the majority of killings ("two-thirds" claims Chirstopher Gilley in that opendemocracy.net article) are laid at Petliura's feet. In fact, Symon Petliura's murder in broad daylight on a street in Paris in 1926 was a direct result of these pogroms - the gunman, Sholem Schwartzbard lost relatives in these extrajudicial killings, and the French court was unwilling to convict him.

The Ukrainian Insurgent Army article is shot through with obviously fought-over editing and a 2013 tag under the "Reconciliation" section - weirdly they have a ranks chart but no drawings of what UPA men looked like in uniform. I found the art below on Pinterest:

A company commander, circa 1943. Notice that the uniform looks German-like with the ribbed patch pockets on the chest, the long boots, the "Sam Brown" belt with the shoulder strap and the location of the pistol holster on the belt. This was taken from a Ukrainian book on the exploits of the UPA. 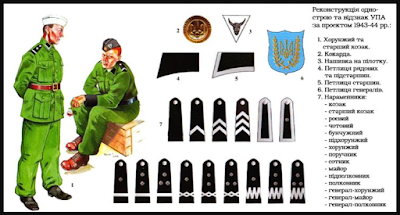 The drawing says this is what they looked like in 1943-44, but I've seen shoulder straps on UPA uniforms from earlier in the war, 1941-42. The UPA used a dual-rank system of regular army ranks mixed with positions like "battalion commander", "squad leader", "regional commander", etc. It does get the green uniform color right and the use of the Ukrainian trident, an insignia still in use with no modification by Ukrainian armed forces today. The only difference between that trident and the one used by nationalist militias in the Donbass in the last seven years is a sword as the middle spike of the trident, an insignia seen in Ukraine during the war. 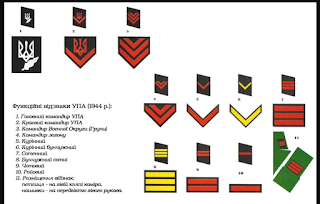 The style of insignia Wikipedia has, which is of the positional ranks. The black square on the left is the insignia of the Supreme Commander, with a German-style oak leaf. The yellow ranks are for subordinate ranks, so "sub-company commander" and "sub-battalion commander."

The West Russian Volunteer Army article is open that Ussuri Cossack warlord Bermondt-Avalov's forces were backed by Germany through the "Black Reichswehr" in 1918-19, and that  there were a large-ish contingent of Freikorps goons/last-ditch soldiers within the "Bermontians", of whom every member wore a cloth white Russian Orthodox cross stitched to the left upper-arm of their uniform, including Bermondt-Avalov himself: 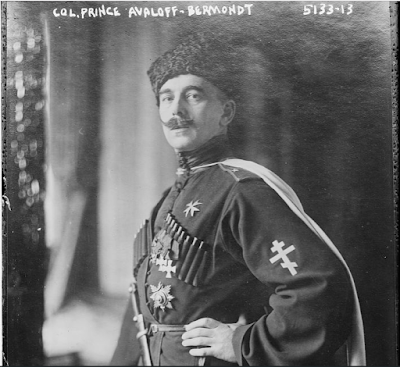 That is a partial screenshot from Wikipedia itself. Nary a word that the Latvians despised him and his army and that they forced him and the Freikorps out of the country after less than two years. They will mention that he became a convinced Nazi (though the love was not shared by Hitler) and that he fled to the United States and died there in 1974. Speaking of the Black Reichswehr.....

......that article is allegedly borked as well. Notice that this tag, like many in this article, is years old and yet no effort has been made to clean things up so that the tag can be removed. Art Madrid is still mayor of La Mesa, CA., even after my article on that gap between Wikipedia and reality. 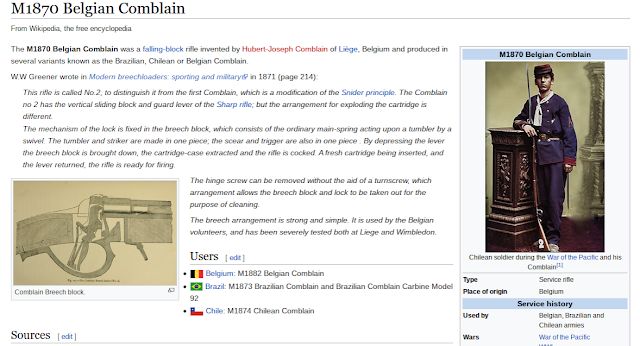 Meanwhile the article on the 1870 Belgian Comblain rifle is a masterpiece of barely explaining how the gun works (it's a single-shot rifle with a falling block, so the back of the firing chamber flips up after loading) and how it was used in the late 19th century "War of the Pacific" between Chile and the combined forces of Bolivia and Peru. They also "link mention" how the 1882 version of the weapon was used for a period during World War I by the Belgians. You are better off with this YouTube video. Notice that it has no tag, though it is screaming for a rewrite.

As with all the IRC chat records I have posted on this site, the number of tags on the English-language is vast and most tags seem to be 7 to 10 years old. Wikipedia needs a paid editorial staff to turn this made-for-free goulash into a real encyclopedia, but that's not happening. We will be come back with more examples at a later date.

________
* The one-man operations also exist in Eastern Europe and Canada, it depends on the scam. I mentioned the Nigerians because Hoax Hotel had hours of fun with those guys early on with his channel.
Posted by Strelnikov at 3:08 PM 3 comments: